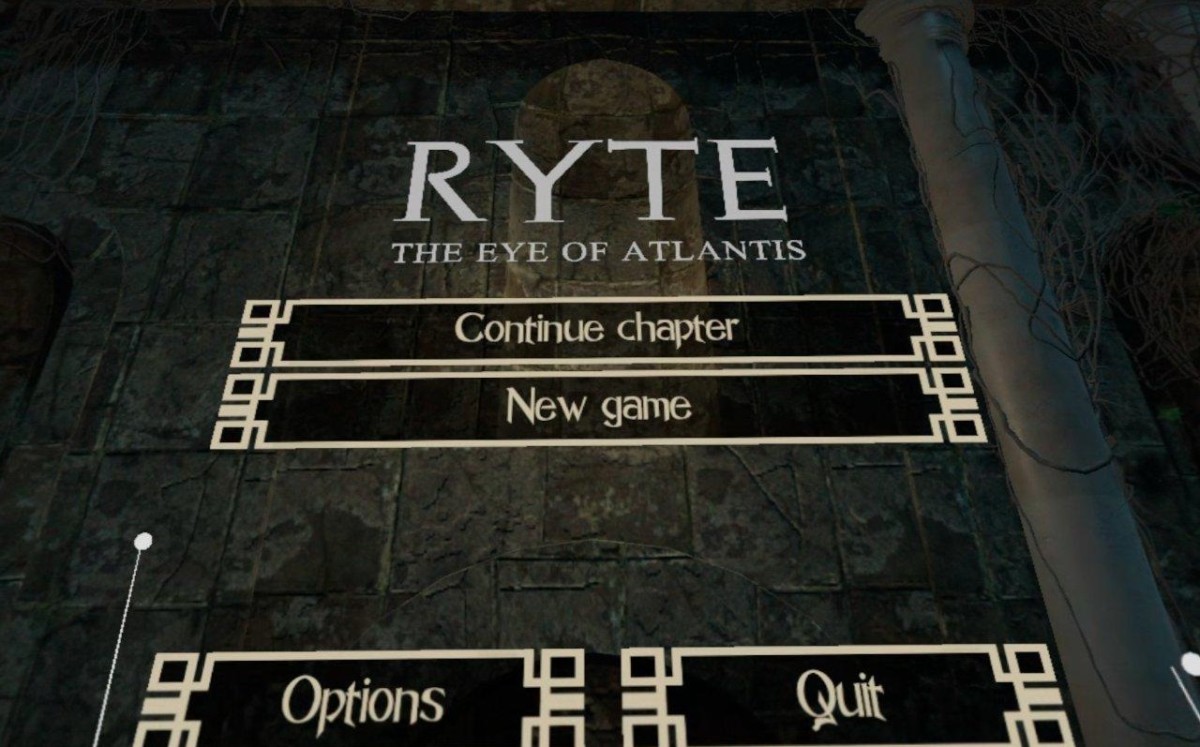 Let’s get started on this Ryte The Eye of Atlantis VR review.

What is Ryte The Eye of Atlantis VR?

Ryte is a first-person adventure and puzzle game that is very similar to old-school Myst.  It is set in the mythical world of Atlantis and plays heavily into themes of mythology and Egyptology. You will need to solve puzzle to progress to the next part of the story.

Who Makes Ryte The Eye of Atlantis?

Ryte The Eye of Atlantis VR review is created by Orichalcum Pictures and VR Connection. Orichalcum Picture is an audiovisual production company that wanted to make content with a focus on archelogy and this game is just that.

Which Headsets is Ryte the Eye of Atlantis Available on?

Ryte is available on Oculus Quest 2 and Steam VR.

“Traveler n ° 2147745, welcome to Historia Time Travel! You have chosen the Atlantis Discovery pack, with the tourist robot-guide option…. You will be able to wander freely without passing for an extraterrestrial with the locals. ”

You play as a character from the future, who with the help of a robot guide companion, travels back in time to the great city of Atlantis. There are lots of puzzles to solve and mysteries to figure out. The initial chapter does a good job of getting you familiar with the world and setting up the story. Eventually, towards the end of the first chapter, things will start to make more sense. An NPC becomes part of the experience and helps to explain things around you. The story starts developing.

The controls here are pretty straightforward. You use VR teleportation to move so people who may have motion sickness issues should be able to tolerate this game quite well. You will pick up and interact with various objects and puzzles as well. I did find that if I played the game sitting down it was sometimes hard to get into the right position to deal with the puzzles. Standing up temporarily or crouching down to the ground will help when you are not sure what else to do.

So just how are the puzzles? This game lives up to the hype of creating an experience similar to MYST of old school days. These are not simple and straight forward easy puzzles. Back before the days of the Internet, when you played a puzzle adventure game, you got frustrated. There was no quick Google or YouTube search for you to figure out how to get past the next puzzle and you would frequently play the game for a while and accomplish little to nothing.

Seeing as I’m writing this review before the game is published and there are not yet a million YouTube guides, I once again feel that puzzle frustration. The puzzles start easy enough but quickly they get into quite complicated out-of-the-box thinking to progress. It is an enjoyable and fun reminder of games that use to be.

The developers have said that Ryte VR Game is inspired by the Disney movie “Atlantis: The Lost Empire’. In fact, the developers said they had lots of inspiration for the game and it shows. There are elements of Greek, Aztec and Egyptian all mixed into one place.  They have also stated that they wanted to create a world that was as true-to-life as possible. You can see that as you play through the game. Even though the developers are using all these fantastical elements and there is a sense of mystery and awe, there are lots of realistic and historical contraptions. It feels like a part history lesson and part fantasy adventure. I mean that in the best way possible. None of the puzzles are things that could not have happened “at the time”. (Ok beyond a few magical moving around of items by thought. )The majority of the scenes and the puzzles are real, using things involving stone weights, pattern matching, logic, and more. It’s a really good experience.

There were several game ‘glitches’ I encountered during play. Sometimes sequences wouldn’t trigger. One time I incorrectly placed the blocks to open a door in the wrong order and nothing I could do would reset them. Another time I wandered around a desert for a good 1/2 hour trying to find, something, anything to interact with before I gave up. I took the headset off and played another day. Almost immediately on reloading, a cinematic sequence would happen that started spawning various puzzles. Another time I somehow teleported through a locked gate area, was able to pick up an item, but as I was not supposed to be in this location yet, I needed to eventually reload to continue playing.

These bugs made it confusing to know if I had just not figured out the next part of a puzzle or if something in the game is supposed to be happening but had not successfully triggered. Eventually, I dealt with this by realizing that if after a while nothing was happening in the game, it was worthwhile to reload the level, even if it meant losing some game progress. This part was defiantly pretty frustrating, but as it is an early release, I expect the developers will continue to work on these issues.

There were a few cinematic sequences that were also a bit delayed in loading. I thought perhaps Ryte had crashed until I looked around and finally noticed that in the distance two large warriors were fighting. The loading screen happens frequently between levels and areas, and it is longer than I would like it to be. It is noticeable. I kind of wish the developers put something more beautiful to look at during these long loading screens.  The loading screen was simply a totally black screen with the word “loading” with an occasional spark appearing. I was aware I was staring at this word for a long time.

How Long is Ryte VR?

I was able to beat Ryte VR in about 5 hours of playtime. Part of this playtime was trying to figure out if a puzzle had glitched or if I needed to do something to solve a puzzle. When the game ended it showed various choices I had made and the outcome. I have to admit I didn’t quite realize the game was ending and like many other VR games out there was left wanting more. I thought the gameplay was just starting to get good and then the game ended.

It did feel like there were two sections to the game and that they didn’t necessarily link up too well. I was hoping for more stories about the “time traveler” section. The robot guide and initial door lock puzzles were gone and never seen again, and as I mentioned overall the end story was confusing and didn’t really explain anything that happened for me. Many characters were introduced and I have no idea what happened to most of them.

Does Ryte VR cause Motion Sickness?

Ryte offers teleportation movement with a point and click movement.  It also has a pretty slow-paced movement.  This means you are unlikely to have off feelings.

It should not cause motion sickness if you use the in-game settings.

Final thoughts on Ryte The Eye of Atlantis VR Review

Ryte is a fun VR puzzle game that reminds you of Myst or other point-and-click adventures. I liked the attention to detail on history and lore. I just wish the developers spent a little more time with testing to get some of the glitches I experienced worked out. Regardless of the technical problems, I still feel this game is a worthwhile purchase as the puzzles are fun and the environment really brings you to "the city of Atlantis" in VR. Just be aware you may need to reload a few times.

What is VRChat? 8 Getting Started In VRChat Tips

Richie’s Plank Experience Review – Can you handle it?

Resident Evil 4 VR Review – Worth It?