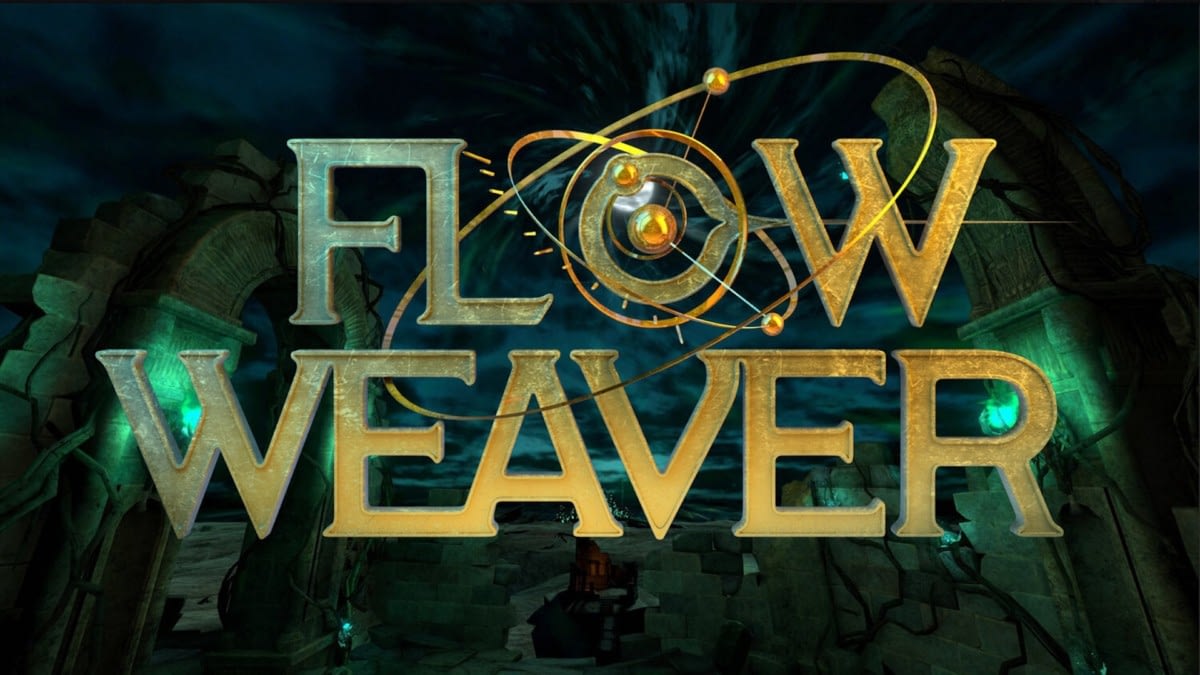 One of the great parts of VR is the ability to escape reality and do some pretty amazing stuff, like casting magic or meeting dragons. Flow Weaver brings these mystical ideas to VR and mixes them with a virtual escape room.  Let’s get started on this Flow Weaver Review.

What is Flow Weaver?

In an escape room in real life, usually, you are locked in a room with a series of puzzles around you, and you need to crack them in time, usually finding some kind of key, that will ultimately unlock the room.

Flow Weaver is a type of VR escape room. You need to solve various puzzles to try and escape the evil necromancer who has cursed you to this fate. 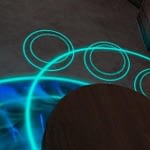 You are a wizard who is stuck in a stationary, magically bound chair. So that means you play this game sitting down and don’t really move. If you attempt to move out of the seated stationary play area, you are presented with a “please return to your seat” overlay. 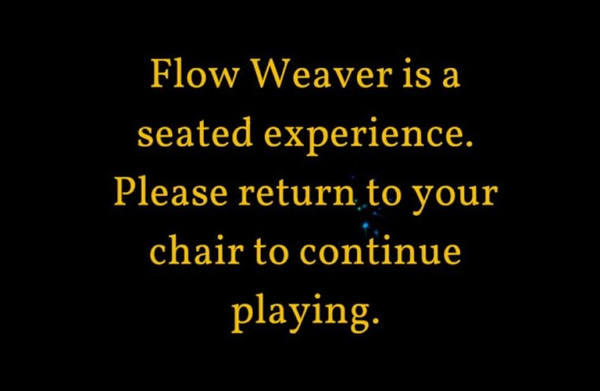 Flow weaver does a great job of creating a mystical and magical environment. The scenes that you see in front of you are beautiful and detailed to look at. A lot is going on even if it is only one room. There is even stuff behind you!

There is also some pretty good voice acting and some cut scenes that help fill in some back story. Unfortunately, you can not skip these cut scenes. This becomes a problem later on if you have to re-do a level or you accidentally click on a stone by mistake. 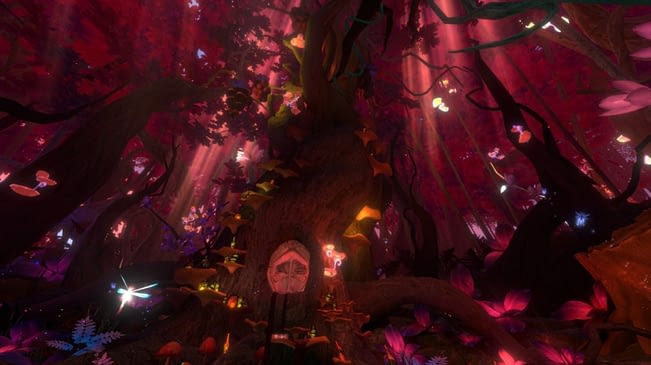 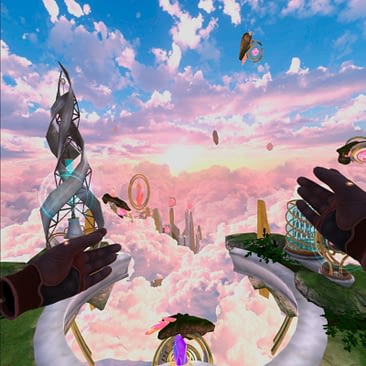 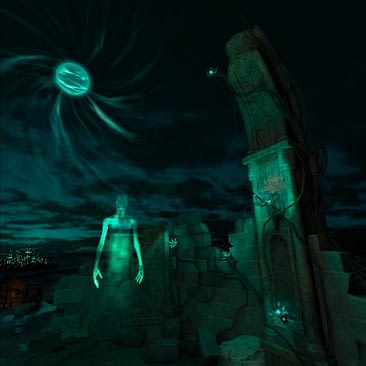 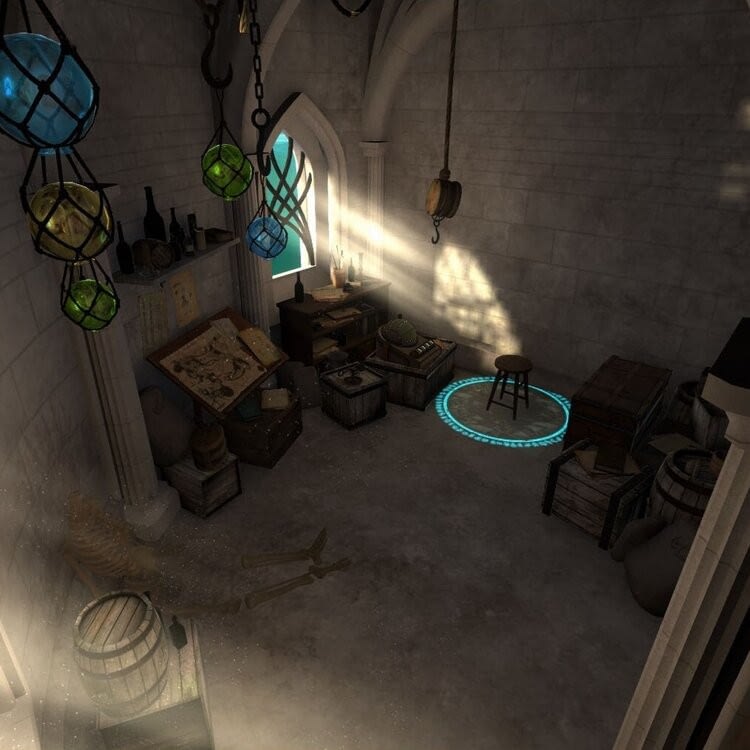 Flow Weaver is full of Glitches and Not Enough Playthrough Testing

We really need to address the bugs. The game has a lot of them. Because you are stuck in a chair and if you try and lean out of that location too much, the game overlay gets displayed, you need to sit as you are.

Most items in the game are accessed by using your magic spells, remotely pulling and pushing with the joystick for example. When this works it’s a great “I am a magician” experience. When it doesn’t work, you aren’t quite sure why it isn’t working. Is it part of the puzzle? Is it something I’m not doing right? It gets pretty frustrating. When you have a puzzle game the last thing you want is control issues because it increases the user’s frustration SIGNIFICANTLY. 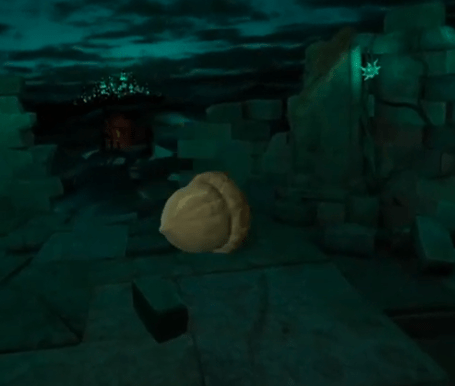 During part of my playthrough, I spent probably half an hour playing with an acorn, trying to get it to do what I wanted. It glitched somehow and kept repeating the phrase that happens when you pick it up. Over and over and over as I fumbled to make it move where I wanted. I had in fact solved the puzzle, but the glitch required that I restart the game to make that acorn DO what needed to be done. 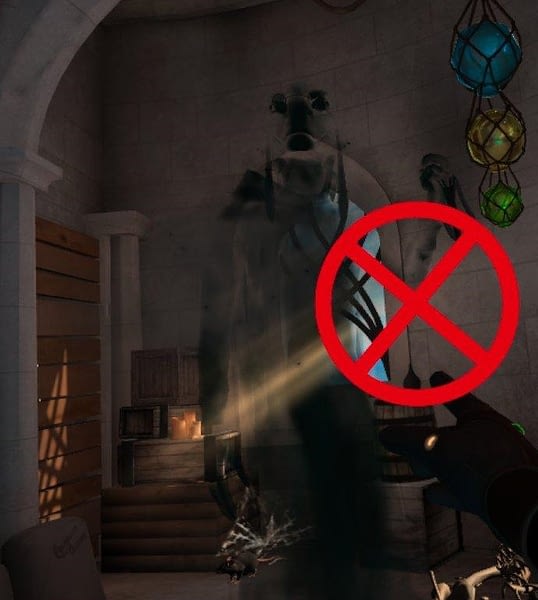 Some more glitches to expect – as you travel between the various worlds with your items, sometimes THOSE things bug and don’t come with you, or don’t respawn where they should. Sometimes you solve a puzzle correctly but it still won’t let you pick things up. And finally, there will frequently be times when you are required to actually reach with your arms and do something with your physical hands. I have a pretty good arm span but still had to ‘re-center’ with the oculus button quite a few times to be able to reach these items and still be ‘within the play area’. I can’t imagine how this might be for some shorter-armed folks. 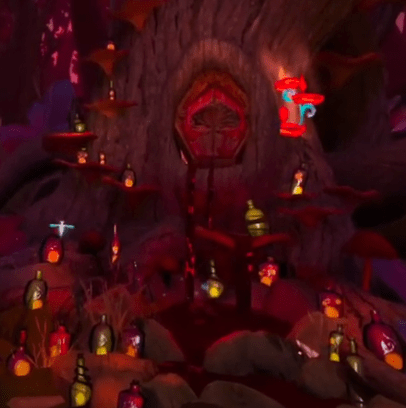 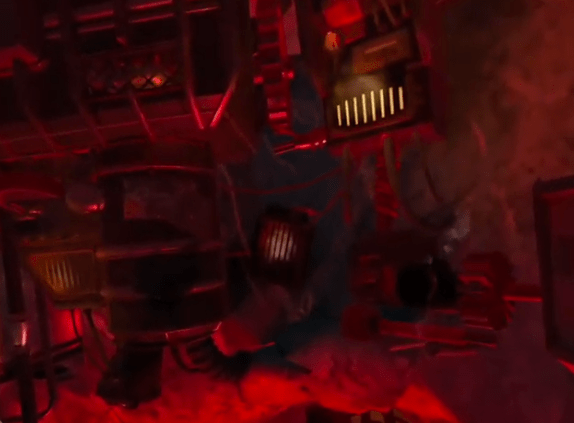 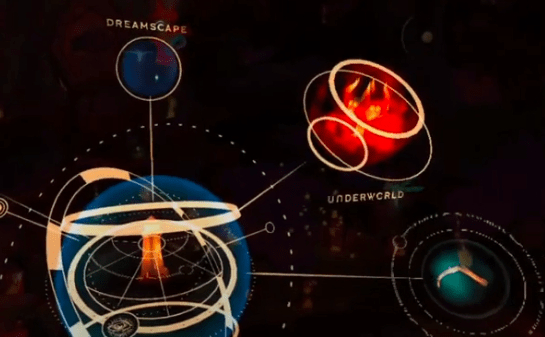 Perhaps one of the more frustrating bugs. There is an automatic save of some kind. I’m not actually sure when those save points are, and there is no visual on-screen to let you know you’ve reached a save milestone. So when you will inevitably have to restart the game because you think you have encountered a glitch, who knows how many parts of the puzzle you will have to repeat. 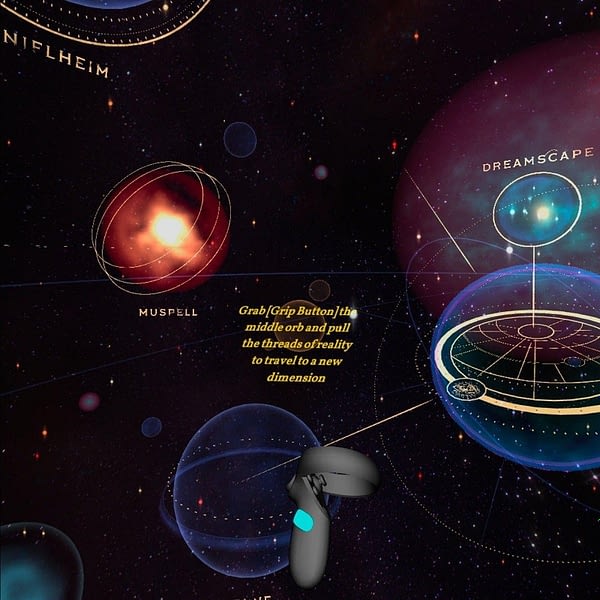 Glitches aside, Flow Weaver VR is an Interesting Universe

If we can move beyond the glitches for a moment… Yes, they will happen and yes you will have to restart, redo those puzzles and play those cut scenes you can’t skip again…. The game itself is pretty fun. I love tearing the worlds to travel with a flick of my arms.

The puzzles are a good mix of hard and creative thinking between the worlds. What can I do in this world that will impact the other world? You will need to spend time thinking outside the box to accomplish many of these.  It also helps to think about escape rooms and the types of puzzles that they generally have as this game makes use of several common ones. When all else fails, press b/y to meditate and figure out which of those magic items you haven’t touched yet. 🙂 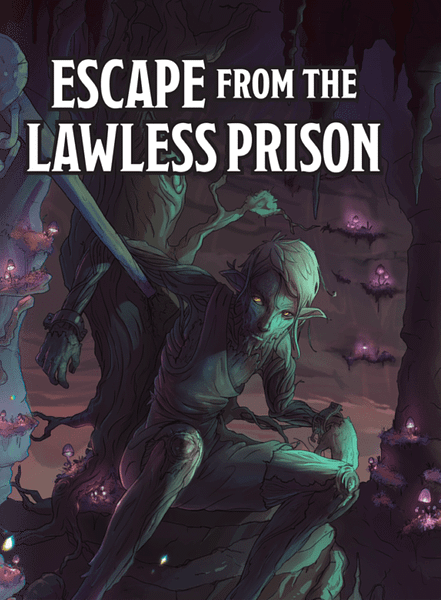 I also appreciate that they have created a new universe and a story with different rules than you typically see in fantasy narratives. It looks like on their website that they are in fact creating an entire set of 5e tabletop RPG rules for this world that you can download for free. Interesting.

You can expect to get a few hours of gameplay out of Flow Weaver. It took me about 3 1/2 hours.

As I played this game when there were not yet any walkthroughs (one of the worst/best parts of video game reviews) so to finally get the ending is always a sense of accomplishment. Unfortunately, there is a pretty hard-core cliffhanger of an ending. There is no explanation, no coming soon, just an abrupt ending. I thought perhaps there may be an alternative ending and replayed a bunch, but no. Exact same. An email to the PR team confirmed I had the one and only possible ending. There are no multiple endings in Flow Weaver VR. 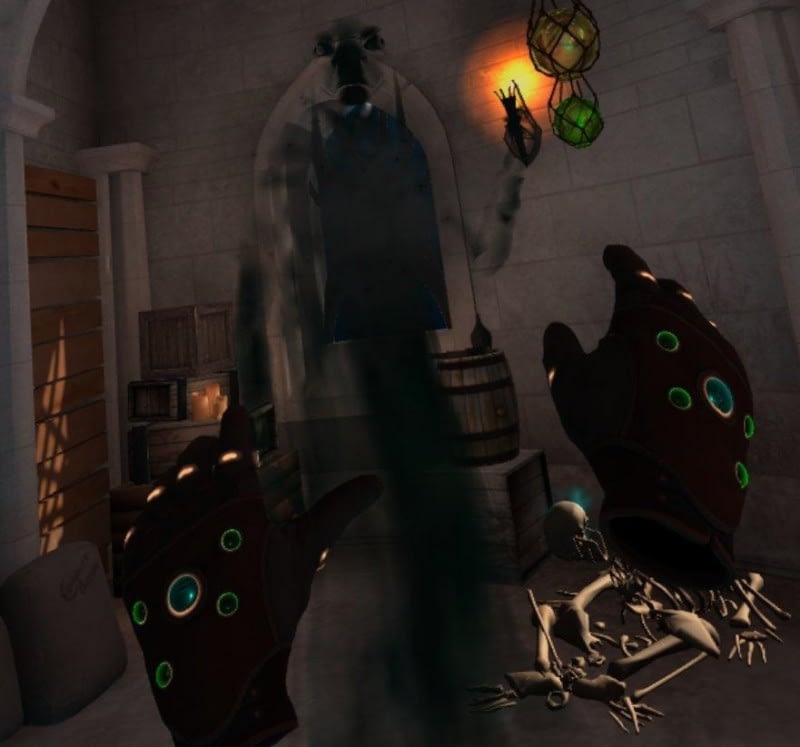 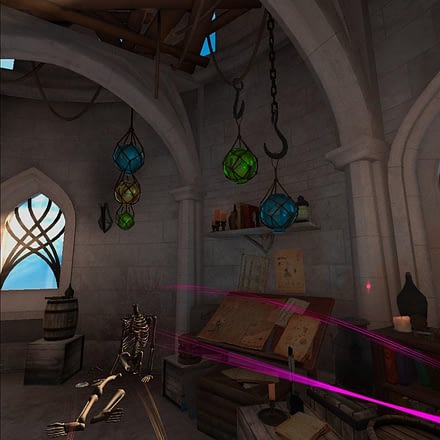 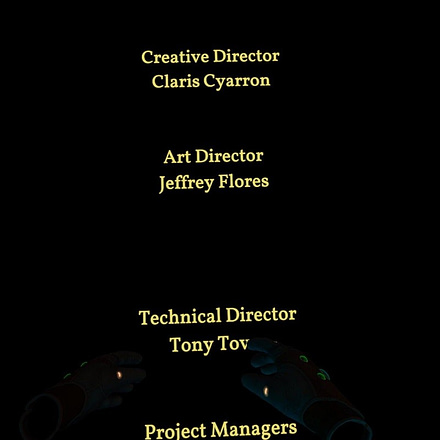 This was double frustrating. After forcing my way through all the various bugs and glitches to get to an ending that is very up in the air was pretty blah. This seems to be more and more common with VR games, Just when things are starting to get good, It’s like the game budget runs out and they publish as-is.

For a game that went so far as to create a separate RPG universe backstory, you’d think they could throw in a line or two about… “Stay tuned for the next part” in the game. I did manage to find this on the Official website though, so I imagine there will be more coming…..

I am very mixed on this review. It has some fun unique elements, but it definitely has some problems.

Does Flow Weaver cause motion sickness?

You play Flow Weaver in a 100% seated experience that you do not move from. No in-game movement means little chance of VR motion sickness.

Flow Weaver should not cause any motion sickness issues. 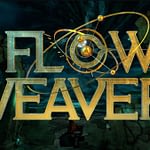 I have very mixed feelings on this game. There are many bugs and glitches that you have to play through. There is a bunch of UI issues like forcing seated play but requiring a user to reach to do certain things, or not being able to skip audio cut scenes. The story is an interesting one, I want to know more about this universe and these characters, but wish the focused more on testing before release. 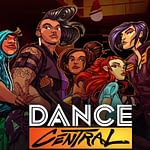 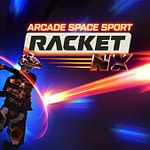 Definately mixed feelings from me on this game too. I wish they did more testing as the story was interesting like you said.