This isn’t the Ratchet and Clank you remember. This re-imagining takes us back to the roots of how Ratchet and Clank met. The release of this game somewhat coincides with the theatrical movie release on April 29. This is the game, about the movie, about the game. The game isn’t afraid to poke fun at itself. During the intro cinematic Captain Qwark and Shiv Helix mention that they pre-ordered the “game” and talked about the “holo-movie.” The story may be a tad different from what you remember if you played the original games. It can’t be helped when stories are rebooted for a new generation, so I won’t even mention the differences. When you’re making a game, about a movie, about a game, certain things get lost in translation.

I played in Normal Mode. Here’s a recording of the first hour of play that I live-streamed below.

The gameplay is top-notch. It’s been quite some time since I’ve played a great platformer. I was addicted to the gameplay as soon as I started playing. The “tutorial” is actually a narrative that actually helps guide you along with the gameplay rather than a step-by-step task completion guide. It fits in with the story and flows flawlessly along with it. Although it is mostly a platformer, there are many different types of gameplay.

You get to play in a variety of ways with Ratchet. One of the first levels on Kerwan requires you to fly a ship and take out a Blargian warship. There’s a little bit of puzzle-solving, but if that’s not your forte, there is an auto hack feature available. Although I like puzzles, I really wanted to get back to beating up some enemies. The Trespasser puzzles kind of removed me from the gameplay.  Using the auto hack disqualifies you from earning the ‘Safecracker’ achievement though. There are a couple of objectives that require flying your ship around and collecting/shooting things. There’s another level where you are firing from a stationary cannon. There are several rail-grinding areas that I found really fun. The hoverboard races are a blast!

Clank also gets some gameplay as well. There are two types of Clank levels in the game. One type has you running towards the player with a warbot chasing you from behind. It’s up to you to dodge obstacles that appear. The variety of gameplay keeps the game interesting.

Once you complete the first couple levels of Veldin and Novalis, the game suggests where you should go, but other planets are open to be traveled to. You can play whichever planet you want to go to next. The narrative continues along the way with every weapon pickup or possible hints about what you should do. Sometimes Captain Qwark narrates something you’ve already just done, but it’s nice to know the help is there for those that need it. It’s almost like having someone playing along with you.

There are tons of weapons in this game that can be used to help you along. What’s a Ratchet and Clank game without the crazy weapons. There are several ways to help them become more powerful. Utilizing weapons helps them earn XP and become more powerful and each level up adds more ammo, increases capacity, or power.  There is also an Upgrade screen from the “gearbox” that allows you to upgrade your weapons on a grid system utilizing Raritanium crystals that you collect throughout the game. Upgrades to weapons include increasing the chances of Holocard and raritanium drops in addition to weapon stats. 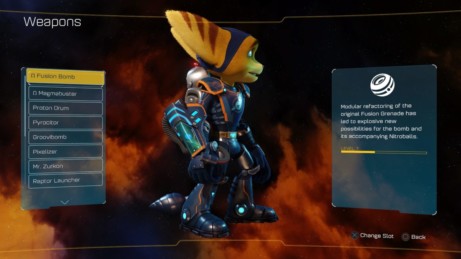 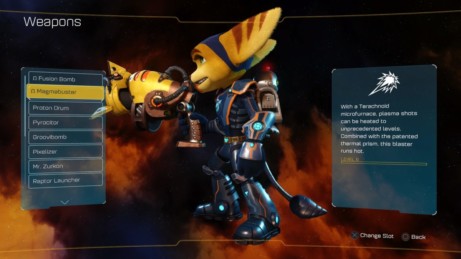 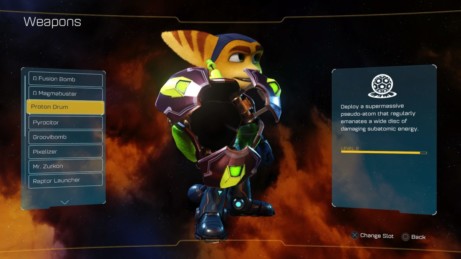 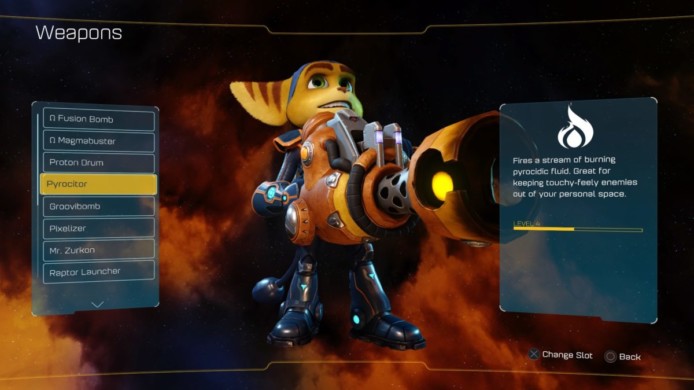 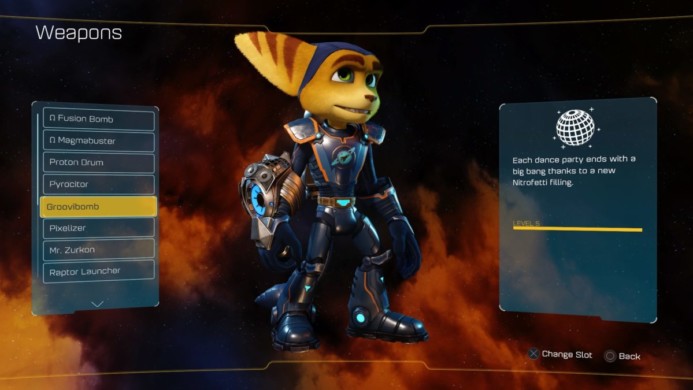 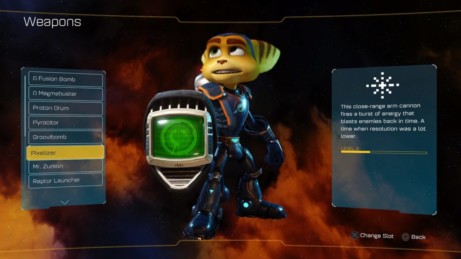 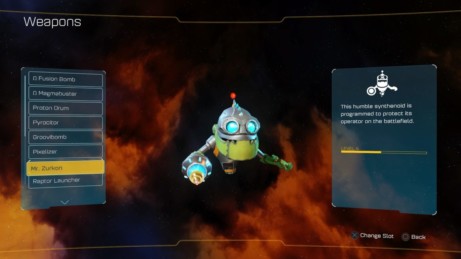 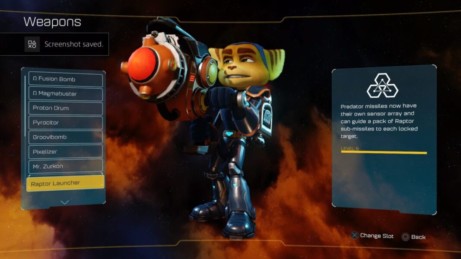 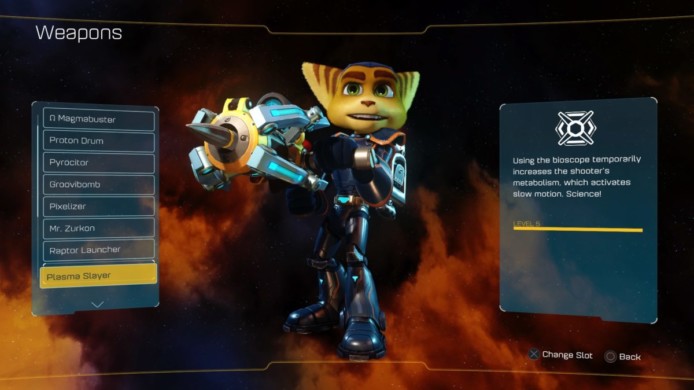 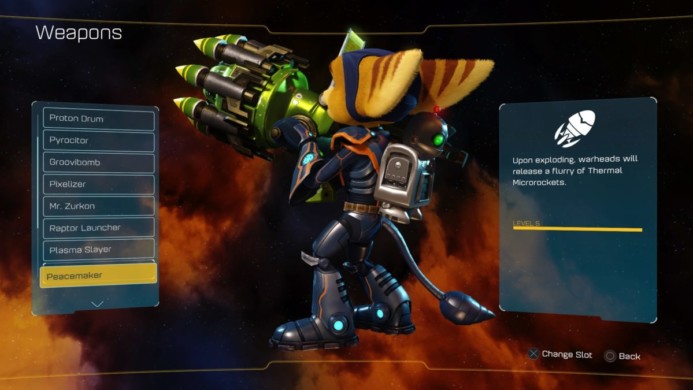 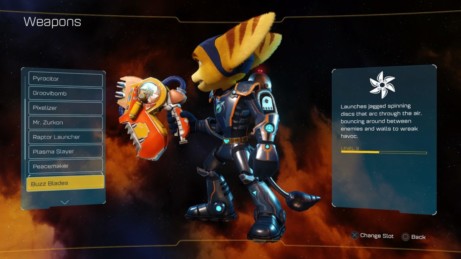 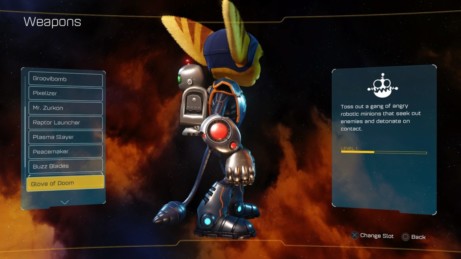 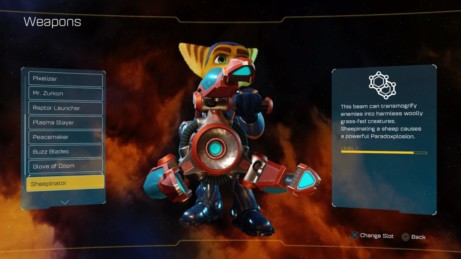 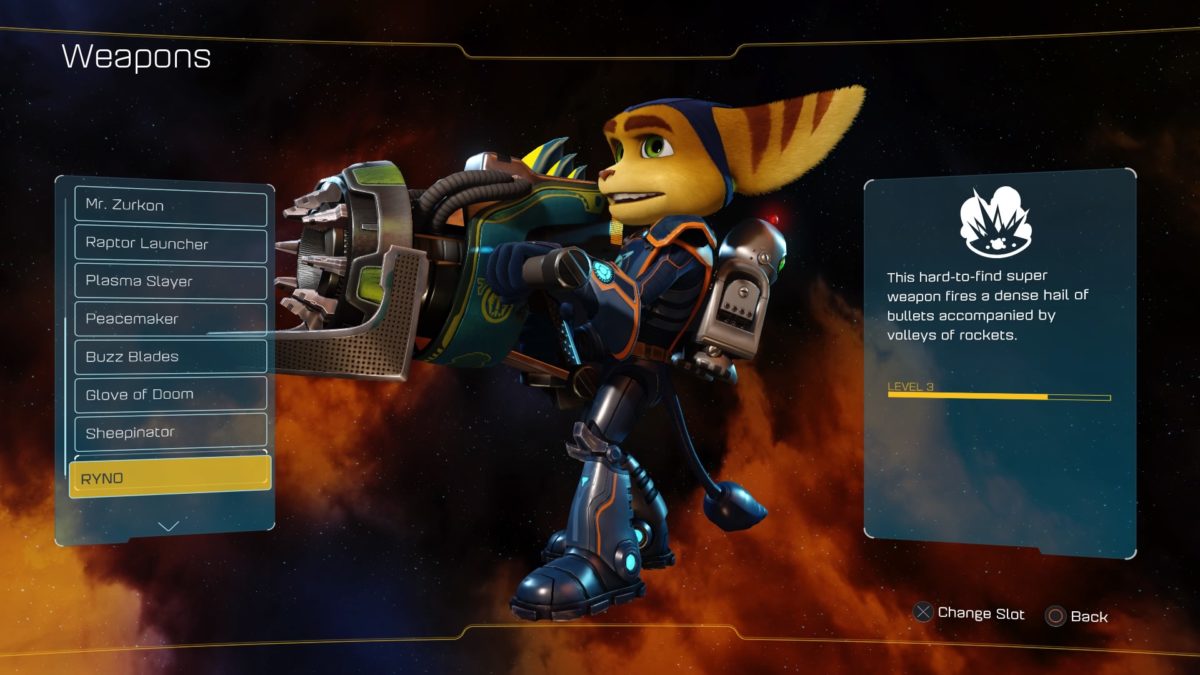 Here are a couple of my favorite weapons in the game:

Graphics have come a long way since Playstation 2 days. The graphics look really good throughout the game. The game is set to 1920×1080 running at 30fps. Setting the 30fps limit doesn’t tax the system too much. Everything flows smoothly. I did not see too many graphical hiccups or slowdowns while playing. Each level has it’s own type of terrain and character and no two levels really look alike. The environments include their own animated nuances. Rain falls and slides down windows, Lava splashes, lights pulse, hover cars fly, and more. The level of detail is superb. Ratchet and Clank’s character animations are very fluid. The distinction between cut scenes and impressive game graphics was almost indistinguishable. They work really well together and don’t interrupt the immersive game play experience.

The cut scenes are the best, the animation is very high quality and the voice acting is top-notch. There was never a time that I wanted to skip them at all. The game uses actual footage from the upcoming movie. I found out the hard way when I uploaded a gameplay video via YouTube gaming and got some copyright notices right away from Universal Pictures citing the exact points in my video where the cut scenes were shown.

RELATED
Why The Incredibles 2 Is Not A Traditional Sequel

The voice acting is first class. I’m sure the voices in this game are the same as those in the movie. Ratchet, Clank, and everyone else has lots of in-game dialogue. While playing there is always chat between Ratchet and Clank. When passing by, Ratchet will sometimes comment on background things like a statue with a little backstory on who or what it is.  At times I was unsure if the character talking to me was Captain Qwark in-game as part of the story or narrator Captain Qwark. Either way, I loved the voice acting. It really brought all of the characters to life. Voice acting will always trump intrusive text boxes. 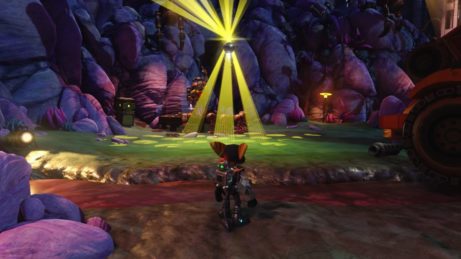 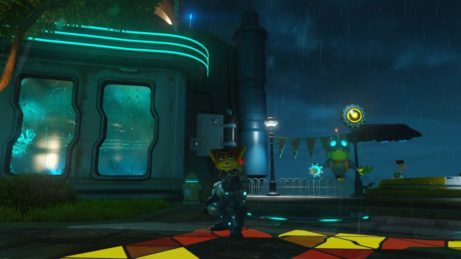 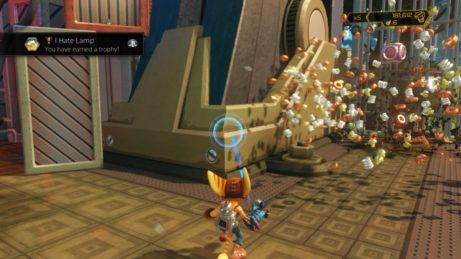 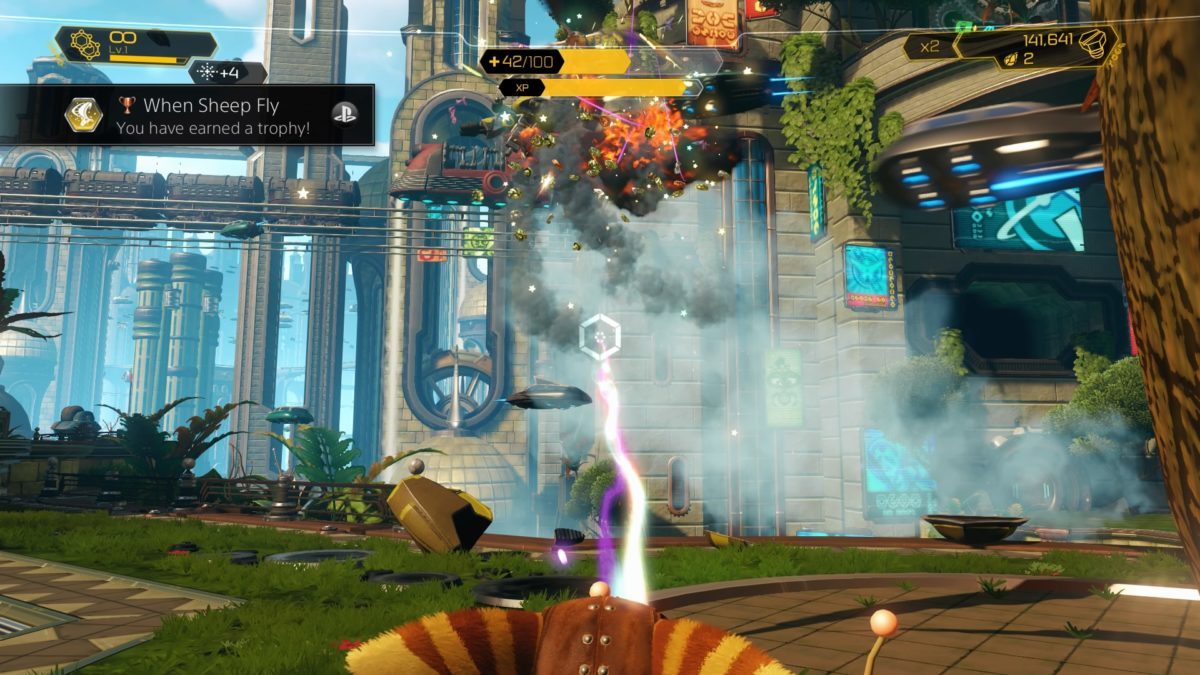 The sounds of the game were great. Each level has its own music. I have my PlayStation 4 attached to a surround sound system. I never got tired of hearing the satisfying sounds of bolts being collected. Each weapon has its own distinctive sounds. On Rilgar you can hear the rain falling as your progress through the level and In the sewers of Rilgar, you can hear water dripping all around. You can hear ships in the background passing by. Explosions make full use of the surround sound to immerse you in the environment.

The intuitive controls feel really responsive and I never had any problems getting the characters to do what I want. One thing that I really liked was the weapons menu on the △-button. Rather than reaching that extra step of reaching towards the options button to get to a menu to select weapons like with many games, Insomniac games opted to make the selection process a little easier. Holding down △ will immediately halt your game, but you need to keep holding it down. While on this screen, you can select a weapon on one of two menus selectable by L1 and R1 by holding the L-stick in any of the 8 directions. Once you let go of △, gameplay immediately starts with your selected weapon. It makes it super easy to swap weapons without disrupting gameplay.

I unknowingly earned an achievement or two just by knowing that all things had to be collected. Replaying levels is inevitable in order to collect everything. I spotted a Golden Bolt in the first Clank level. I knew I wasn’t able to reach it yet.  I passed by many golden bolts knowing that I couldn’t reach them… yet. I also spent a fair amount of time in Gaspar collecting brains.I completed that achievement without any help. Little did I know that later on there would be a map upgrade to show you where all the hidden items are on the map.

Gold Bolts unlock Image Galleries, Appearance settings such as Screen Filters and Masks, changing your armor, repainting your ship, or even hiding the HUD. Cheats are also unlocked. You can increase the game Speed and set it so you have infinite health and ammo. One caveat of the infinite ammo cheat is that you don’t earn any XP when enabling infinite ammo.

Holocards are another in-game item to be collected. They’re not just cards, but also power-ups. Each time you complete a mini-set of 3 cards, you get awarded a bonus. These bonuses include weapon stat upgrades, Ω weapon unlocks, and drop bonuses.

Some achievements are easy to miss. Once you complete a planet, there aren’t too many enemies that re-spawn for you to defeat. The only ones that re-spawn are the lower-level enemies. I missed out on a couple of achievements because I killed most of the enemies on my first play-through and wouldn’t run into them again until I restarted my game in Challenge mode.

Challenge mode allows you to earn the rest of the achievements that you want to complete. Challenge mode is basically restarting the whole game, but you get to keep all of the weapons you already earned in the previous play-through. The only things you have to earn again are the gadgets you earn in-game to help you such as the jet-pack and underwater breather.

There are a total of 47 achievements to be earned in-game. The list is here from Insomniac Games.

I did encounter one bug where the cutscene after defeating Dr. Nefarious at the end of the game didn’t start, possibly due to the Day 1 patch that blocks the broadcasting of cutscenes. I ended up having to start the boss battle to beat the game.

Is Ratchet and Clank Worth it?

Ratchet and Clank is one of the best Playstation 4 games I have ever played. This is the type of game that shows the true power of the PlayStation 4 hardware. Ratchet & Clank is the type of game that you see when developers have learned how to develop properly for a system and can harness the full power. I had a hard time taking breaks from the game. I wanted to constantly play. I’ve finished one playthrough and completed the game. I am already halfway through Challenge mode and have collected 35/45 trophies. I don’t usually want to replay games so soon, but for some reason, I really want to with Ratchet & Clank. I am enjoying it the second time around. This game sells on the cheaper end at $39.99 for a new game, but I would have gladly paid the full price of $59.99 for it. So whether you’re a fan of Ratchet & Clank or not, this is a solid action/adventure game that has great gameplay and entertainment for everyone.I totally think that Ratchet and Clank is worth it!

You can find a copy at Amazon below. don’t forget that Amazon Prime Members get a 20% discount when buying new games.

Ratchet and Clank is one of the best Playstation 4 games I have ever played.

I am Super Ben. I like to fly around the world for work and for fun. I nerd and geek out 24/7 via social media. Come follow along before I get hand cancer from mobile phone overuse. I might be a kid pretending to be an adult.
Subscribe
0 Comments
Inline Feedbacks
View all comments