Let’s get started on this King Of Fighters XIV Review.

Nearly 20 or so years ago, some of Capcom’s Street Fighter project members decided to jump ship and create an alternative to their beloved fisticuff endeavor. With 4/6s of the buttons, broken engrish, and probably some amazing dreams to follow, SNK’s bread and butter genre, attributed to several successes and failures to their names. Even an amazing collaboration with their forefather company. With bankruptcies and refocuses, SNK is back with King of Fighters 14, but is it enough to undo Street Fighter’s missed opportunity? 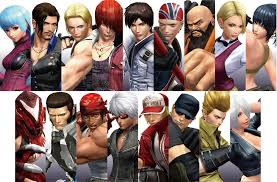 After the many entries in the series, a champion seems to take the reigns. Through the rights and image of the tournament sold, Anotov ups the Rugal’s reign of the King of Fighters‘ owner with a plot to do more damage, to the brand, than its’ former antagonists. Of course, this is a thing, but an interesting setup to a new arc. SNK doesn’t slouch. Especially in the “distraction boss” template.

Taking a cue from Street Fighter’s 5th official coming, KOF 14 spares no expense to making the grade in bringing over what predecessors left off with, but making the jump to the next level. The roster seems to be its’ biggest yet with 50 characters out the box. All your usual bangers, including some return favorites, oddballs, and some cool new ones. KoF 12 dumbed a bit down on this end, but the paint job was justified. KOF XIV has the standard fare, with some amazing music, and modes, some sort of surprises. The party mode’s 3-on-3 mode is a well-received change. Each player chooses a character and go at it in a 3 on 3 bout. Pretty much like the usual KOF, just with other people. Online Training is also a plus. This is considered the most accessible entry in the series. The auto-combos are almost similar to its’ PS2 Maximum Impact entry. Sure, it’s good to start with, but hard to continue with KoF XIV.

With it’s pluses, there are minuses in KoF XIV for myself. To many, this game reeks last gen compared to its’ last artistic overhaul. Then again, when was SNK the king of all other aspects that weren’t aesthetic? not really much of a horrid idea to keep things early PS3, but the heart. You can’t take away the heart. Apparently, SNK did in KOF’s personality. Gone away are the special intros, which now are taken place by dialog. Weird, strange, somewhat out-of-place-dialog. Like I need to know if Mai left the damn A/C on. I don’t, but I do care about the mention of Andy’s mentee or the reason why Geese has returned to the KoF Stage. Needless to say, it’s a nice touch but not a very good one.

RELATED
The Will To Keep Winning Book Review

The online has been improved heavily from launch, but the Online Training is a tough one to get onto unless you’ve got a discord server. My own personal beef with XIV would be the lack of Garou/AOF characters to return. In previous games, we saw Mark of The Wolves, Art of Fighting, and Fatal Fury characters come to the series. Now? We’re just looking at a handful. There’s hope in the DLCs, but hey – it’s KoF. They already have a diverse roster for an SNK return.

The Final Verdict of King Of Fighters XIV Review

It keeps traditional and gets modern, and almost as good as the ’98 Dream Match. Even if this isn’t a resurgence to the butter churned SNK days of the yearly update, XIV has done the yeoman’s work compared to its’ Capcom competition, which leans more on the Miss Right than Miss Right Now. In fighting games, thanks to some of the 2010s titles with tucked-away DLC, fans want Miss Right Now. King of Fighters has a bright future ahead of it, regardless of the next direction SNK will take with King Of Fighters.

Product Name : King Of Fighters XIV
Website : https://store.steampowered.com/app/571260/THE_KING_OF_FIGHTERS_XIV_STEAM_EDITION/
Price : 59.99 USD
Product Description : THE KING OF FIGHTERS XIV finally hits STEAM! KOF XIV is back with its classic 2D gameplay and "3-on-3 TEAM BATTLE" game system but evolved to 3D! 58 charismatic fighters are about to clash in this new chapter of KOF!

King of Fighters XIV has jumped on leaps and bounds since XIII. With a surprisingly large roster and decent netplay, ease of use, XIV has covered some bases other fighters have not this year.

You don't need Kung Fu for this monestary! Dollar Yen got them RPG stylings at night. No stone unturned and probably killed because they are mimics. No hidden boss encounter too easy! Watch Dollar Yen undertake grinds, minigames, and horrible Boss Battles!
Subscribe
0 Comments
Inline Feedbacks
View all comments