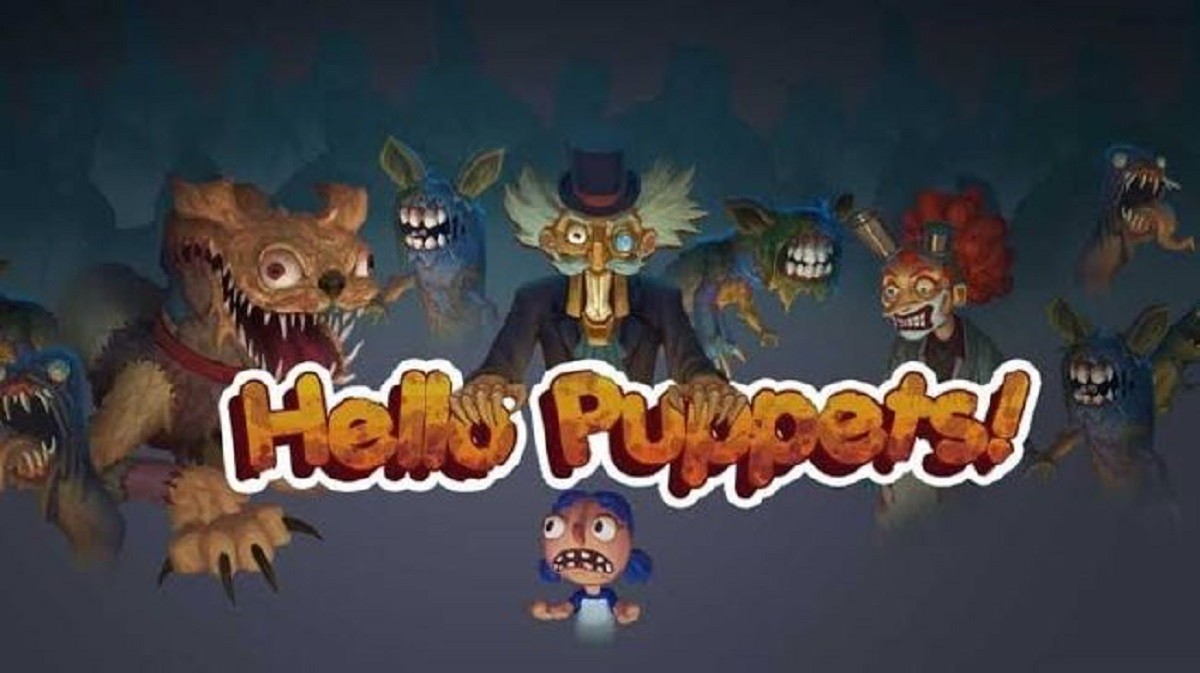 Let’s get started on this Hello Puppets! Review.

What is Hello Puppets!?

Hello Puppets! is a dark, mysterious, VR horror- comedy adventure game. Your hand turns into a living puppet named Scout and you will need to figure out the mystery of Mortimer’s Handeemen.  Although there are puppets everywhere, this is NOT a kids game.

Which headset is Hello Puppets Available On?

Hello Puppets! Is available on Steam VR and Oculus Rift. 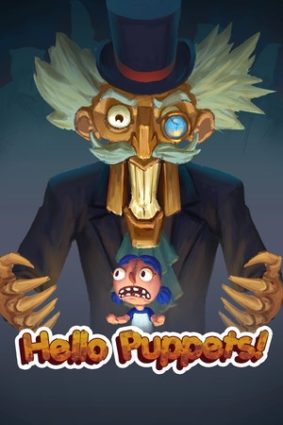 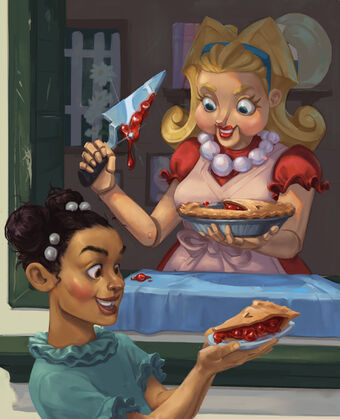 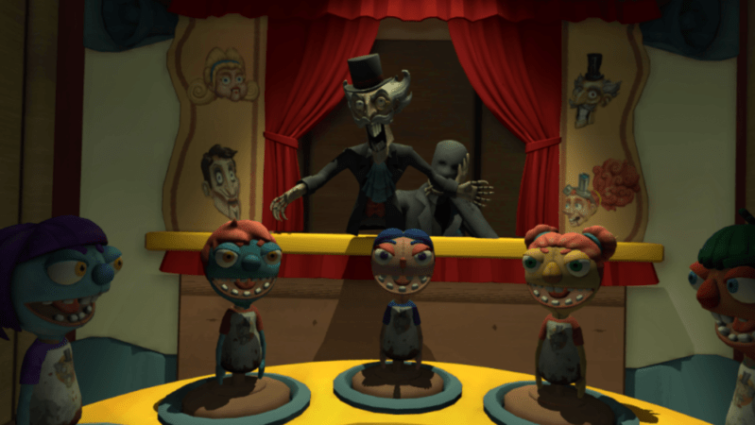 You are a journalist for a local paper who is sent to check out a local “haunted” TV studio of a dark, Sesame Street-like, knock-off called “Mortimer’s Handeemen”. The kid’s show has long since been canceled but something sinister is happening at the studio.

You will need to make your way through various puzzles and figure out what is going on there and how to escape. Sounds simple enough but this VR game is full of jump scares, horror themes, spooky sounds, and funny/scary dialog. 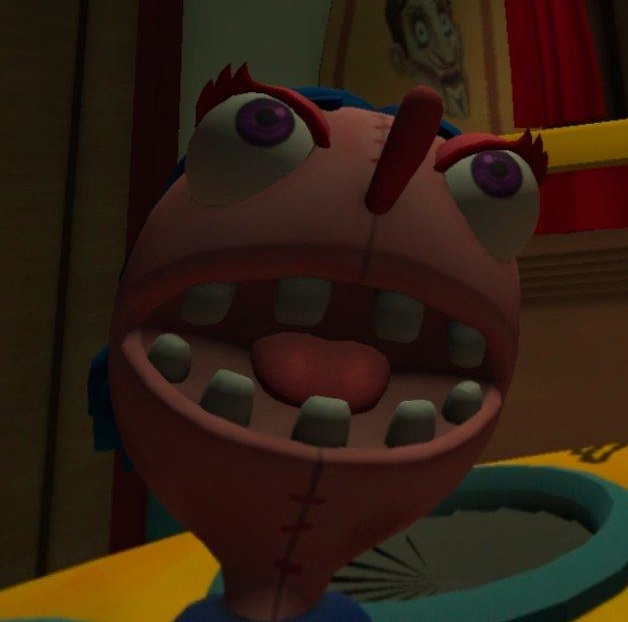 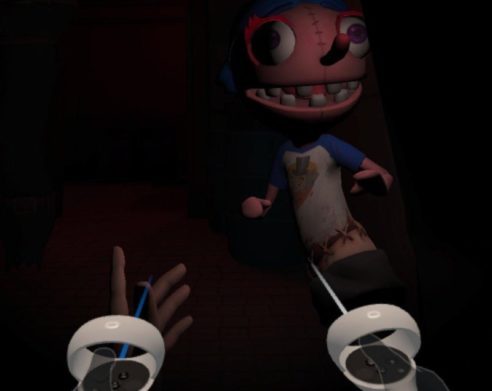 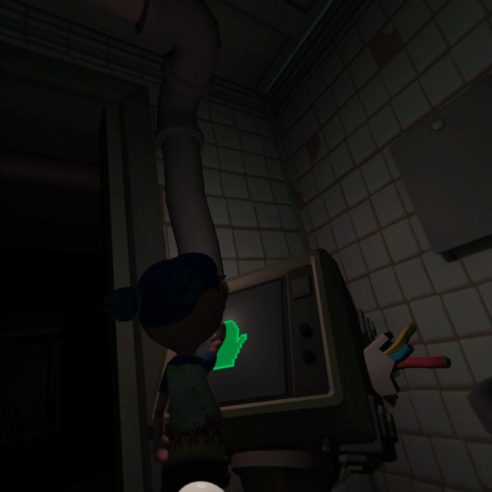 Scout the Puppet…. She’s something Special

In the first few minutes, your hand will be removed and a foul-mouthed puppet named Scout will be sewed on to replace it. Scout, your puppet hand replacement is a witty, sarcastic, and fun companion as your play through the puzzles of Hello Puppets!.

She will frequently swear, insult, laugh, joke and encourage you all in one breath. It’s a refreshing character that is breaking the norm of usual NPCs.

You will use Scout to solve puzzles with ‘her’ as your one hand, doing one thing, and your other real hand, doing something else in the game. There are several witty puzzles and ways to use VR here that I haven’t seen used in other games. There are also lots of plain simple puzzles too. 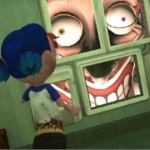 You might have to push a button at the same time as you hold Scout up to a different button for example.

You will be looking up high and down low and around corners. A few of the puzzles had me stumped for a bit, but usually taking a break at that point and returning to the game caused me to figure them out. Overall there will be buttons to push, doors to open, items to find, and all while you are running away from bad guys.

You don’t talk in-game but you will nod or shake your head to communicate with Scout at different times and she will even remember your responses. This will shape the story even more and adds to the bond you feel with this character. The voice acting from all the characters in the game is really spot on and immersive. 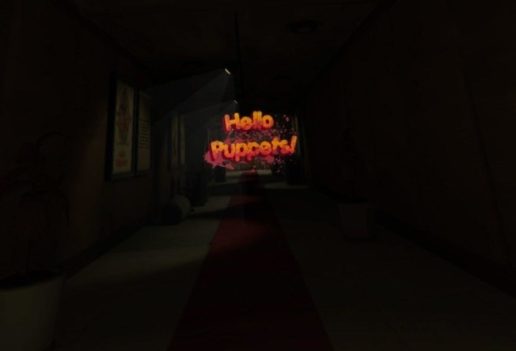 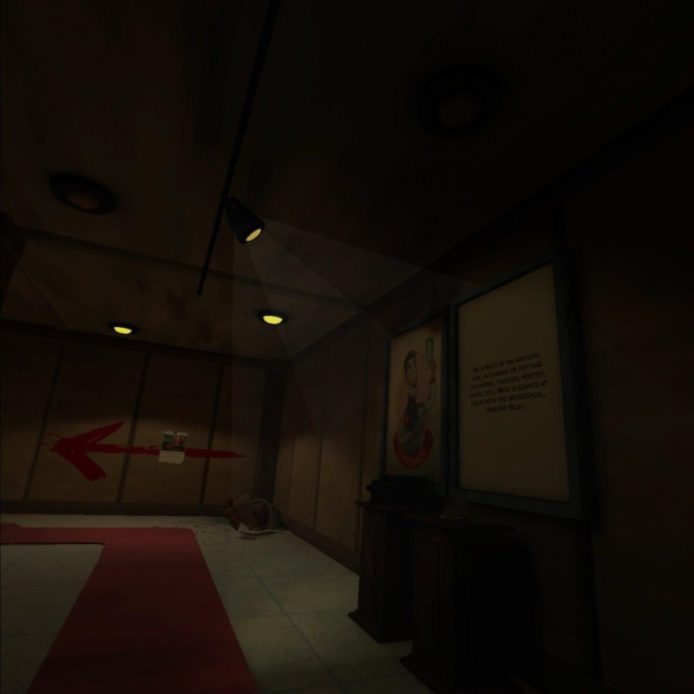 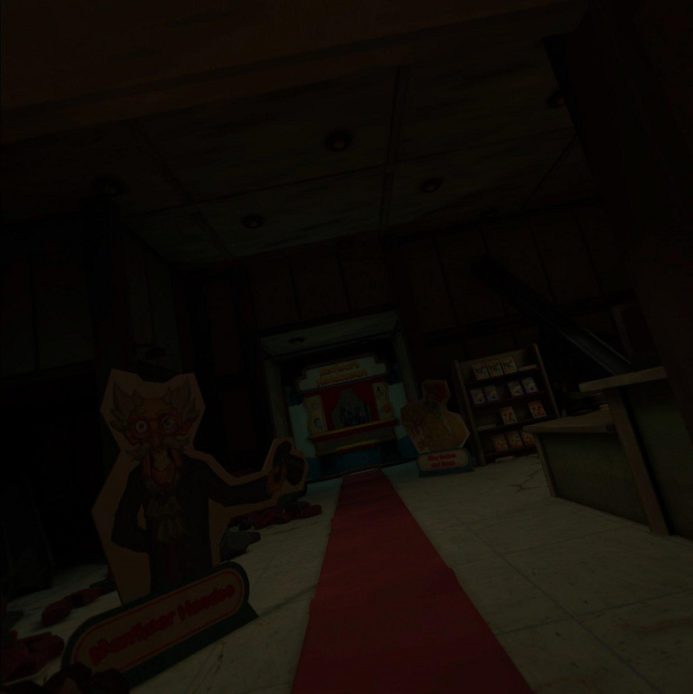 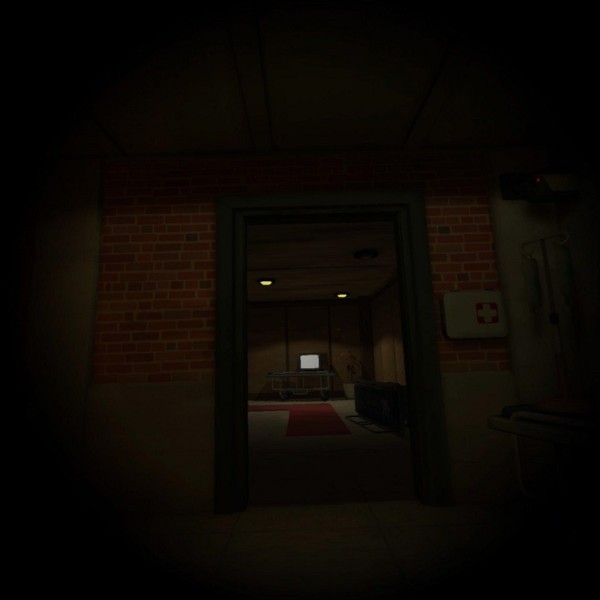 As you can see by the Hello Puppet screenshots, this entire game is quite dark. This adds to the spooky atmosphere. I never felt it was “too dark” that I couldn’t move or enjoy the game though. You also get to tap Scout on the head and she instantly becomes a flashlight for you to see in a short beam ahead of you with.

Even though the entire game is cartoon-like and had puppets everywhere, there is also a fair share of dismembered body parts, blood splatters, and horror scenes too. This cartoon effect kind of adds to the dread feel because you know something is “wrong”. Between the darkness, these disturbing “kids tv show mixed with bad things” and the soundtrack, you will likely feel on edge.

How long is Hello Puppets?

I played this game over several days, but it is a couple of hours of gameplay. My Steam playtime shows as 3.4 hours and I took my time with it as I enjoyed every minute of it. 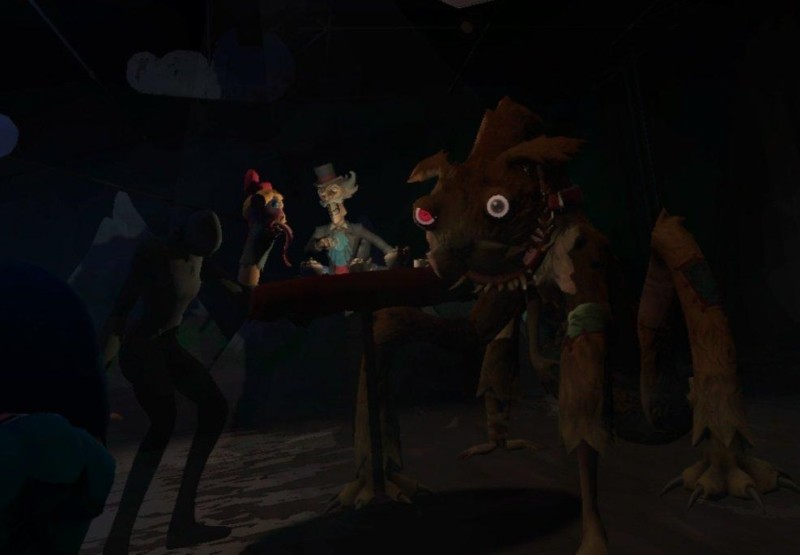 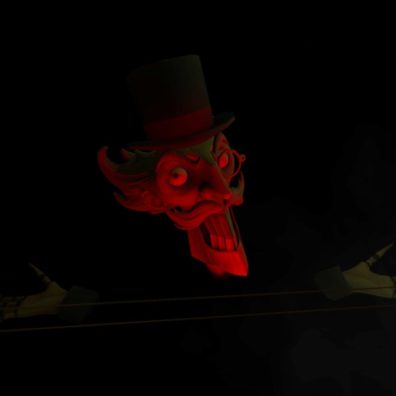 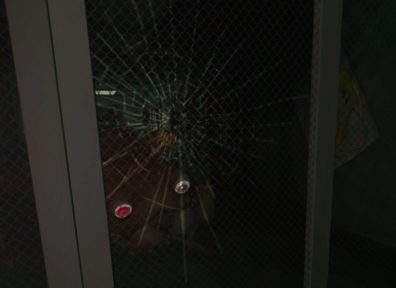 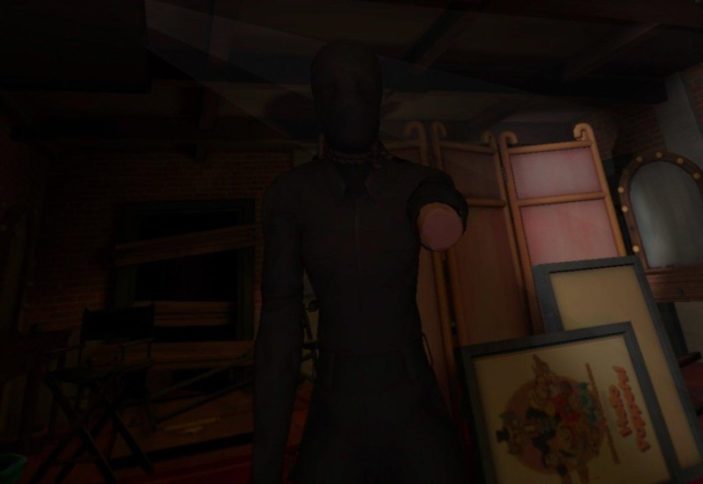 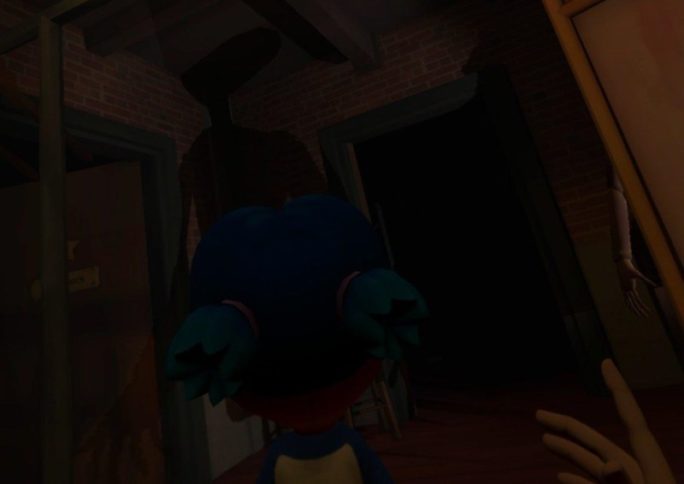 Does Hello Puppets Cause Motion Sickness?

There is a lot of in-game movement in Hello Puppets!. You can edit the in-game controls and use either teleportation or walk movement with snap turning. If you turn on “Comfort Blinders”, there is little chance of motion sickness as you move through the map. Turning is done with click turning, which also helps with stopping motion sickness.

If you use these controls Hello Puppets! should not cause motion sickness issues.

Can you Play Hello Puppets Sitting Down?

Yes. You can easily play this game from a seated position as long as you have some arm room around you; although you may be required to stand up for a few of the puzzles to reach the right spots. You will not need a large play space if you want to play standing up.

One of the great parts of Hello Puppets is that the horror doesn’t come from simply jump scares. Although this certainly looks like a Five Nights At Freddie’s, there is plenty of non-jump scares spooky moments too. I found the jump scares that did happen, didn’t annoy me. I was in fact fully scared and giggled to myself for jumping. Just like you want.

Yes Hello Puppets is Worth it!

Product Name : Hello Puppets!
Website :
https://store.steampowered.com/app/1426280/Hello_Puppets/
Price :
19.99 USD
Product Description : Go on a horror-comedy adventure that turns your hand into a living, talking puppet named Scout. Years ago, a bad Sesame Street knock-off called “Mortimer’s Handeemen” was canceled and forgotten, but the puppets from the show have come to life. They’re pure evil and they have plans for you.

Between Scout's witty quips, to the dark storyline, Hello Puppets is a great horror game to explore in VR.

I will stress again that the dialog that comes from these characters is really unlike anything I have seen in a game before. They swear, they insult you, they talk about farting, death, and destruction all the while looking like a cute little kid's toy. That in itself is worth the price of admission.

The Secret of Retropolis Review VR